Modesty: So Much More Than A Hemline 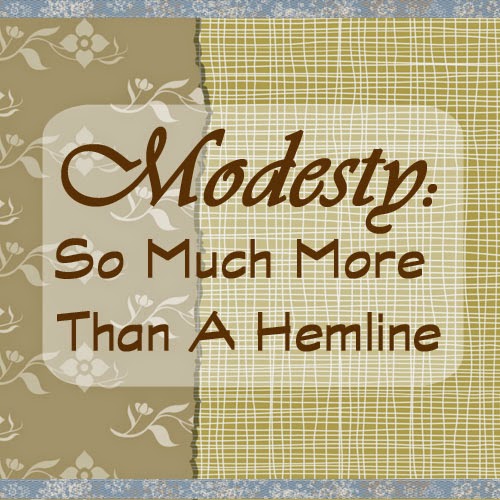 Modesty is a hot topic in the LDS culture. On any given Sunday, in any given ward in the United States (and I'm sure many other countries) you will spot a female with a skirt several inches above the knee, someone in a sleeveless top, someone with cleavage showing, or someone's underwear line showing. Shoot, on any given Sunday you could probably end up seeing up some poor girl's skirt because of the way she is sitting.

There is no official modesty police at church, though there never seems to be a shortage of people willing to mentally police their ward.

We have plenty in our LDS culture who are "slut shamers." There are both men and women who hold the immodestly dressed responsible for eliciting the sexual thoughts and behaviors of others, sometimes going so far as to claim "she's asking for it." For what exactly? Sex? Well, certainly prostitutes are asking for sex by the way they are dressed. In fact, plenty of women out on the town on a Friday night are asking for the same thing. Yes, they want to have sex. Try not to be shocked. But the 13 year old at church with a skirt 3 inches above her knee? Probably not. For the record, slut shaming is rarely effective in teaching principles of modesty. Men are responsible for their own thoughts and actions. To say that women are responsible for a man's sexually elicit thoughts contributes to a rape culture that degrades women and blames them for situations that are beyond their control. Immodesty has consequences and you can point them out (as in men may have sexual thoughts about you when you dress sexually), but you are not responsible for anyone's sins but your own.

Sometimes in the LDS culture our teenage girls and even our adult women fall into at least a similar category. Perhaps they aren't asking for actual sex, but they are certainly asking for attention. They dress to enhance their sexual characteristics, drawing attention to their breasts or butts to attract men. We have a natural desire to be loved and admired. Dressing to enhance sexual characteristics is very effective in gaining attention. It may not be the right kind of attention, but it is certainly effective.

Society and the media are very confusing. They teach us that being sexually appealing will lead to love and happiness. Our society equates lust with love. Our teenagers act out sexually (including dressing provocatively) in order to soothe their natural desire to be loved. Unknown to them, their God-given need to be loved can not be quenched by lust.

Mormon modesty lessons often focus on hemline locations, do's, and do not's. My message is different. It focuses on the foundations of modesty.


Heavenly Father gave us each a precious gift when we came to mortality. He gave us a body. We know that our Heavenly Father has a body of flesh and bone, and that we were excited to be able to receive this most precious gift. These mortal bodies are a precursor to our resurrected bodies which will at that point be perfected and immortal. Our bodies hold within them special powers beyond which we can truly comprehend. We also know that Satan and his followers will never be allowed the privilege of a body.

Satan does not want us to respect this gift. He would rather we degrade the gift, use it for wicked purposes, corrupt it, defile it, or otherwise distract us from the sacred responsibility we have to guard, take care of, and nourish this gift.

As women it is easy to feel criticized when it comes to modesty. I make no apology for our standards. This is the Lord’s standard as revealed through modern day prophets. My message is not meant to offend, but rather to remind us all of the blessings associated with modesty and invite all of us to experience and embrace those blessings.

We live in a day and age where Satan has created a very sexualized world. The messages we receive can be confusing.


"Your daughters as well as your sons are coming of age in a world that openly embraces early, casual, and thoughtless promiscuity. Immodest, unchaste women are glamorized and all too often celebrated and emulated. While there are steps that we can take in our homes and families to minimize our exposure to these unsavory elements of contemporary living, your daughters cannot entirely avoid the blatant sexual messages and enticements that surround them. You need to have frequent, open discussions during which you teach your daughters the truth about these issues.

For example, they need to understand that when they wear clothing that is too tight, too short, or too low cut, they not only can send the wrong message to young men with whom they associate, but they also perpetuate in their own minds the fallacy that a woman’s value is dependent solely upon her sensual appeal. This never has been nor will it ever be within the righteous definition of a faithful daughter of God. They need to hear this—clearly and repeatedly—from your lips, and they need to see it modeled correctly and consistently in your own personal standards of dress, grooming, and modest living." M. Russel Ballard SOURCE


When we live the principles of modesty in dress, we are giving an outward expression of an inward commitment, much like wearing the temple garment. We are showing that we know who we are and we are living it. Our families will be blessed when modesty in dress is taught and lived. Children will learn respect for not only their body, but the bodies of others. They will learn that sex appeal is not attractiveness. They will gain power in this life by learning early on that lust does not equate to love.

We live in a world where women are often crass. Life isn't so much like an episode of Downton Abbey anymore. [sigh].

Does your language leave something to be desired?

It’s more than just swear words and being crude. Are you giving voice to the things of the Lord? Do you speak of God and Christ in your homes? Are you speaking to others with kindness?

Do you gossip? Do you put others down?

What do you think of yourself? Are you kind to your body in your head? Do you degrade it by thinking it isn’t good enough? Do you pinch your fat and examine your wrinkles in the mirror? Do you love yourself just the way God made you?

Then there's the whole thinking about others portion.

Do you sexualize others? Do you mentally criticize the appearance of others? This would include judging others for their hemlines. Yes, this means that the mental modesty police aren't so modest themselves.

How about the way we treat our body?


Modesty is an interesting topic. It is so much more than hemlines. Expectations for hemlines have changed over time, but the eternal principles of modesty never changes. I've only touched the tip of the iceberg here. When we teach our daughters (and sons) about modesty it needs to be so much more than a list of do's or don'ts. It is a constant discussion of a higher level of living that goes far beyond what you are wearing. It is about realizing who you really are.

Adult women have plenty to teach themselves about modesty, too. I know I do. I am a strong advocate for modesty. I can only hope to someday exemplify the modesty that the Savior exhibited in his life. Jesus was a modest man, and it had nothing to do with his hemlines.

Modesty is a lifelong quest that requires you to discover who you really are as a child of God and the precious and sacred gift He has given you with this wonderful, beautiful, and often quirky thing called a body.

Email ThisBlogThis!Share to TwitterShare to FacebookShare to Pinterest
Labels: modesty